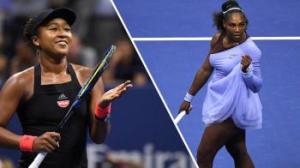 After two weeks of intense battles at Flushing Meadows, the US Open finals are now set: Serena Williams versus her long-term idol, Naomi Osaka from Japan who became her country's first ever woman to reach a Grand Slam final. The duo's only encounter was earlier in 2018, in Miami, where the young Japanese beat 23-time Grand Slam champion 6-3 6-2 in first round.

Since their match, everything has changed. Miami was Serena's second tournament after her return from pregnancy leave and Naomi already won her first premier 1000 title at Indian Wells — the tournament just before Miami. So, it was obvious to say that Naomi was more prepared than Serena, yet Serena still had to make adjustments to level up her game. In the following months, Serena managed to reach the finals of Wimbledon and is now ready to appear at Arthur Ashe once again to aim her 24th Grand Slam to tie with Margaret Court's record, having won the title six times prior while that will be Naomi's first debut.

Through the finals, Serena beat Magda Linette in R1, Carina Witthoeft in R2, sister Venus in R3, Halep-slayer Kaia Kanepi in 4th — the one she only lost a set, Karolina Pliskova in quarters and Anastasija Sevastova in semi-finals. Pliskova was an obstacle in Williams' way to reach the finals in US Open back in 2016 so, it was one of the matches that could put Serena in trouble, but to no avail. Since the start, Serena displayed an amazing performance in her serve and winner stats; sweeping her opponents in an average of 1 hour and 10 minutes.

However, it is no different for Naomi Osaka as well. Except her fourth round, the blooming Belarussian Aryna Sabalenka who just played semi-finals in Cincinnati and won her first title in the following tournament at New Haven, Naomi only spent at around an hour in the court. Her second round against Glushko (6-2 6-0), third round against Sasnovich (6-0 6-0) and quarter-finals against Tsurenko (6-1 6-1) did not even last an hour; 50, 50 and 57 minutes respectively. Like Serena, she only dropped set to Kvitova-slayer Sabalenka in the fourth round, 6-3 2-6 6-4. The Japanese won her semi-finals against the last year's runner-up Madison Keys 6-2 6-4 in 1 hour and 26 minutes. Also, like Serena, Naomi's serve performance was top-notch this tournament, having 91% of her first-serve won against Tsurenko in quarters. That means, she scored 20 points out of the successful 22 first-serves she landed against the Ukranian's side.

Who will win? I anticipate Serena, but I wouldn't say no for Osaka to win either. I'm a long-term Serena fan and can't wait for her to finally tie the records with Maragret Court, but I'm happier that she is finally returning back to her Champion form and geniunely believe we will see Serena in more finals while it may not be the case for Osaka given her younger age (20). Both played extremely well and deserved their spots in the final, but I think Serena's shots and serves might come a bit too much for Osaka to handle, simply because her backhand side needs improvement compared to her forehand. On the other hand, Serena 'wants' the title. She wants to see the 24th, especially now that she became a mom and mentioned a couple of times that she is playing for all mothers across world. She will give everything she got to capture US Open.

Serena in two sets, is more likely to be the outcome. But, who knows? Naomi might surprise us with the performance she already displayed against Serena before in Miami so, I would be OK for her to win as well. I've been closely watching Naomi since 2014's Roland Garros when she was only 16 and scoring back to back Grand Slam third rounds, and I knew she would finally reach to that point. I am exicted for Saturday, probably even more than I was for Serena-Kerber match-up despite it was Serena's first final after her return.