Osaka Battles Past Drama to Win US Open 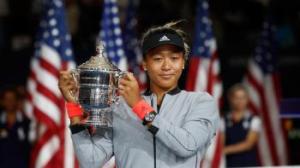 Flushing Meadows has witnessed perhaps a match that will go down in history for many reasons; from Serena's overall attitude to Naomi Osaka winning her first ever Grand Slam at the age of 20. However, the victor tonight was the young Japanese who performed flawlessly to beat her idol in straight sets; 6-2 6-3 in an hour and 19 minutes. For the record, Naomi beat Serena with the exact same score back in their first encounter in first round of Miami.

Serena felt the pressure and it was visibly on screen from the way she exhaled. The arena was packed, cheering for Serena all the way, it is impossible to not to be hyped and get the aura surround you even if you are 23-time champion, but she should have handled it better with all the experience under her belt. Her game wasn't in her 100%, or even perhaps lower than 60% she said after her press conference after her win against Sevastova in semi-finals, but it was all about Osaka who stunned Serena in every possible way; from her 110-and-above MPH serves to striking clear winners and made Serena run from corner to corner. Much as Naomi handled her serve, she also consistently broke Serena to win the first set 6-2.

The second set is why I'm considering the match going down in history: It was less about tennis, it was drama. Patrick Mouratoglu, Serena Williams' long-term coaching consultant, has been caught on-coaching, resulting Serena to get a warning, which he later justified the chair umpire for admitting he coached to ESPN. However, the way Serena took that personally was incredibly unbelieveable. She blamed Carlos Ramos, the chair umpire, as she has never cheated in her life and she is a mother of a daughter. First, she has never been accused of cheating by the umpire. Second, Serena sparked an unnecessary attention to peak the drama. From there, it just went worse.

After Naomi broke Serena again in the second set 2-3, Serena smashed her racket into pieces and got a second warning for racket abuse, resulting a point penalty. Point penalties are issued if a player commits at least two official warnings by the umpire, so Naomi snatched a point from Serena and later won the game to love to make it 3-3. Here is the important part: Point penalties or verbal warnings are common in tennis. You can be warned for many reasons including coaching, exceeding the serve time, set-breaks, shattering rackets and having a direct conversation with audience. But, if you are warned twice, then certainly your mentality must be questioned. We are talking about Serena Williams and the way she behaved was completely unprofessional. You have come here to break a record, win the 24th Grand Slam, she should have handled herself much better but instead, the match was the exact replica of what I'd call against Kim Clijsters in 2009 and Samantha Stosur in 2011 US Open.

After Serena was broken yet once again in 4-3, with the score now favoring for Naomi in the second set, it was pure unnecessary drama by Serena. She threatened the umpire by calling him a thief and a liar for taking a point away from her. She might have failed to realize due to extreme expectations from her, but tennis has rules like every sport and it doesn't change based on sex, race or gender. Once again, history repeats as Serena couldn't handle herself in fiery exchange between officials and she has been given 'yet another' warning for verbal abuse: Game Penalty. From that point onwards, everything just escalated quickly. A quick conversation between the head officials did not solve the problem at all despite Serena's constant yelling: "It's not fair!". Serena haunted herself while Naomi wasn't affected by a single margin and continued to impress with her style. With the game penalty, the score was now 5-3 and Serena was serving to stay in the match.

Despite what happened, Serena hold on to her serve to make it 5-4, but Osaka's mentality was on point. At 5-4 40-30, she dispatched an excellent wide serve to Serena's backhand to conclude the erratic match. Both women hugged each other at the net exchange, but Serena was still on her remarks to umpire about owing her an apology and how he will not ever officiate her matches, which she has no say on that. In a short summary of why the match has gone down in history is as follows in bullet-points:

How about Carlos Ramos? Was he right to take an action against Serena? I have said a couple of times in my blog that Serena is my favorite player of all times, but today I write that with a sheer of disappointment. There is no excuse of Serena to blame a chair umpire for sexism for the warning she got, because the rules clearly indicate that players are to be charged with penalties if they go over the board. There doesn't exist double-standards for men and women when you're clearly at fault, the difference only comes from how strict the rules are enforced by that specific umpire. Men argue as much as women do, but I would question the umpire for not handing out men a penalty because the rule was breached. It doesn't justify Serena to call someone a 'liar' or 'thief' when you know it is clearly not right and then use it as an opportunity to defend herself and outburst. Remember, Serena did that twice before in which she got a point penalty in 2009 for threatening to shove the ball down line umpire's throat and called Eva Asderaki 'unattractive inside' when she was given a penalty for distraction in 2011. That is not the first time you see Serena having meltdown.

I feel Naomi's first-class performance was outshone by Serena's actions which I feel sad for her. She shouldn't have undergone such a treatment given how special it is for a 20-year old to win her first Slam against her idol. Not to mention Serena should stop advertising she is playing for women all across the world as it was not her habit at all. As Mats Wilander said: "Tennis requires to be selfish: If you don't play it for yourself, you don't succeed." Serena immediately needs to get rid of all the commercials and promotion surrounding her and solely focus on her tennis. She already is a great Champion, she doesn't need to build more fame to make such statements and pressurize herself even more. It is not going to help Serena to break a record.

On the bright side, Naomi Osaka will enter Top 10 for the first time and will find herself as the 7th seed in the next week as well as being the youngest player in current Top 20. As the winner of the last Grand Slam of 2018, Naomi earned a total of $3.8M cheque; 100K more than what Sloane Stephens got last year.