Courage is the Key for Bencic to Win Dubai 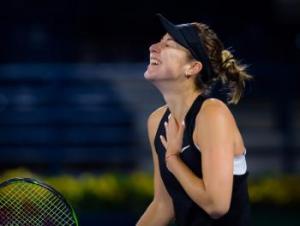 Belinda Bencic displays courage, strength and passion to conquer Dubai after saving six match points in the third round against Aryna Sabalenka and went on to beat four Top 10 players in a row to take the thropy home. With the victory, the Swiss has finally found herself back at Top 25, as the 23rd, having struggled multiple injuries since her last, and first, Premier 5 title in Toronto 2015.

Belinda was 'the' promising youngster according to many due to her outstanding record in Juniors and having won multiple Junior Grand Slams before taking on the WTA Tour. She beat the likes of Serena Williams and Simona Halep to reach her first Premier title in Toronto and played quarter-finals in US Open at the age of 17, however life hasn't been the best for her since she had to undergo multiple operations to deal with her wrist, and eventually lost her momentum. Her friends from the Junior Tour, Jelena Ostapenko and Naomi Osaka, already outshone her with both being claimed as Grand Slam Champions while all the physical and mental struggle Belinda had to go through, but she managed to turn the tables a bit now and has shown the promising light we've missed to see from her.

Despite being six match points down against Aryna Sabalenka in the third round, she never gave up and went for her shots to even the match and grasp the win, especially considering Aryna's massive power and offensive-style tennis could have ended the match much earlier in her favor. The rest of the tournament wasn't an easy-peasy journey for her at all, as she had to beat Simona Halep from a set down 4-6 6-4 6-2 in quarters, the two-time defending champion Elina Svitolina in semi-finals from 5-3 down in final set 6-2 3-6 7-6(3) and this year's top-form player Petra Kvitova 6-3 1-6 6-2 in final round clash. Once a Top 10 player (#7) Belinda had to remind she wasn't here for kid around.