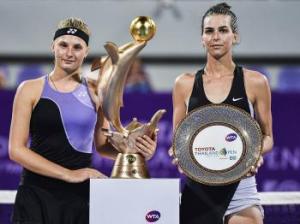 Dayana Yastremska wins Hua Hin Thailand International after a controversial final against her Aussie opponent Ajla Tomljanovic 6-2 2-6 7-6(3) to reach her second WTA title at the age of 18. The teenager's MTO (Medical Time-Out) request at 2-5 down in third set was heavily criticized whether it was necessary or fake as being the momentum-changer of the match.

Dayana has been performing brilliant since the last quarter of 2018, have continuously been winning matches and earning experiences against big names, and won Hong-Kong International against Qiang Wang at her peak 6-2 6-1. No wonder she used the one-month break from tour in December to build her skills even further, physically and mentally, to have a fresh and strong start this year. Despite her loss to legendary Serena Williams in R32 of Australian Open, she made a remarkable achievement to wipe Garbine Muguruza off of the court in her way to reach the final round here in Thailand.

Having a strong start in the first set 6-2, she seemed a bit struggling with her pace and shots to hit clean winners and instead increasing the numbers on her unforced errors. While on the other hand, her opponent Ajla is an experienced player whom saw three finals earlier but managed to clinch none, she secured the second set 6-2 by only benefitting from Dayana's mistakes and headed to the third set with the momentum now on her hand. Ajla's 7 winners in total perhaps was one of the reasons why she slipped down the Championship from her hands as she played completely defensive and only put the ball across the net against a huge-offensive player like Dayana whom can suddenly explode, find the right time, and turn over the match. Leading at 5-2, Dayana decided to take an MTO to bandage her feet, in which that part was mentally affecting Ajla at that point by arguing with chair umpire as well as the audience was not particularly happy seeing that might be a fake call to take a moment and refresh herself. As it happened, Dayana recovered, broke Ajla twice and sealed the deal for the second time in her career, leaving her opponent pissed and having scored zero for the fourth time.

Moments like this are common in tennis. It is not the physical status of players that often sink down; these players are training daily to live for such moments. The mental toughness holds the most importance in order to not to give any slight advantage to the other party and let them get to your mind as games slip away from the scoreboard. You have to remain solid no matter what position you are in (E.G: Naomi Osaka, Australian Open '19 Final) and put up the best fight to write your name in history. Whether it was a staged-show from Dayana Yastremska or not, she took the advantage by showing how tough she can be when she is on her game, even at the age of 18. She is now the #34 in the World, while Ajla Tomljanovic is now the #41.