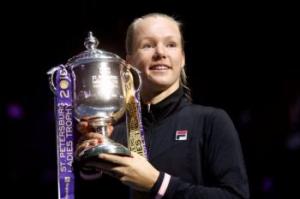 Despite having a struggling start to the year at the Australian Open, on-form Kiki Bertens has performed brilliant tennis to defeat the breakthrough player, Donna Vekic, in straight sets 7-6(3) 6-4 to add another WTA Premier title under her belt. The duo's last encounter was only a few weeks ago in Brisbane where the Croatian emerged victorious against the Dutch in tough three-sets.

However, it wasn't an easy process for Bertens to clinch the win. Having down 2-5 in the first set against flawlessly-performing Vekic, she successfully recovered back and lead 6-5 in which I would say Vekic got broken perhaps a bit mentally to not to close the set when it was on her hands. Coincidentally, the runner-up of Hua Hin Thailand International, her countrywoman but representing Australia, Ajla Tomljanovic, also lost a set in tie-breaker despite having the lead at 5-2 in the same day. Seeing Vekic's struggling on her serves, Bertens showed no mercy to turn over the match and even went on to win 11 points in a row up until 6-5 to seal the deal in the first set.

Vekic has been improving quite a lot lately, which is why I've considered her as breakthrough player and she is working with Angelique Kerber's former-coach, Torben Beltz. I knew it wasn't going to be a lopsided match in favor of Bertens' even though she couldn't finish when she had the huge advantage in the first set. Down at 1-3 0-30, Vekic finally hold on to her serve to even the set at 3-3-, later on 4-4, however the struggle on her serves was real and she couldn't prevent one-and-another double faults to hand the game over to Bertens at 5-4 where the Dutch went on to win St. Petersburg Ladies Thropy 2019.

In the current inconsistent state of WTA, having two young women promising silver linings for the season is pleasing, and a bit of a fresh air especially for Donna Vekic. Bertens beat the quarter-finalist of Australian Open Anastasia Pavlyuchenkova and the future star Aryna Sabalenka in the process to reach the finals while Vekic beat the runner-up of Australian Open Petra Kvitova, and back-on-form former World #2 Vera Zvonareva. None of the women have come victorious through luck, it was a hard-earned and well-deserved final ticket for both parties. With the win Bertens secured her Top 10 position as the World #8, while Donna leaves with gains as now being the #25 in the World as well as peaking as high as the 9th spot in Porsche Race Singles.