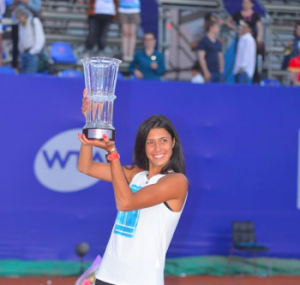 Lucky Loser Olga Danilovic captures her maiden WTA title at Moscow International, beating Alexandra Potapova 7-5 6-7(1) 6-4 in the final round. The Serb managed to defeat a Top 10 player, Julia Goerges, and another on-form player, Aliksandra Sasnovich, respectively in quarter-finals and semi-finals to reach the happy ending. With brand new 280 points on hand, Danilovic will rise 75 ranks to find herself in her career-high spot as the 112th.

Goerges achieved her first Top 10 career ranking earlier in the month by reaching her first career Grand Slam semi-final in Wimbledon 2018, while Sasnovich knocked out the tournament's favorite player, Petra Kvitova, in the first round and eventually fell Jelena Ostepanko in the fourth. Both players had a fantastic grass court season before heading off to US Open Series, but it seems like they had no chance against the Lucky Loser to win her first title. Still, reaching the QF and SF rounds shortly after the previous season is a remarkable achievement for both players.

However, the question remains for those who haven't heard about the term Lucky Loser: What is it? How do you earn a place in the draw as one? Lucky Losers are the players who failed to qualify for the tournament's main draw, but are given a second chance to participate in cases of main draw withdrawals. For Olga Danilovic, she actually got beaten in the second round of the qualifying draw by Paula Bodosa Gilbert 7-6 4-6 6-3, however she was given a seat in the main draw with Petra Martic withdrawing due to her right foot injury.

2018 has also seen the Italian player, Marco Cecchinato, winning in Budapest (Gazprom Hungarian Open) as a Lucky Loser as well. With the points and confidence on his back, Cecchinato reached the semi-finals of Roland Garros 2018, beating players such as the current Wimbledon champion Novak Djokovic, David Goffin, Pablo Carreno Busta and likes. It was Dominic Thiem who was the obstacle for the Italian to reach the very-first Grand Slam finals debut in his career, after struggling so long to even make it in the first rounds of slams.

With the recent win, Olga Danilovic becomes the first woman in her generation of 2000's to win a title at the age of 17.