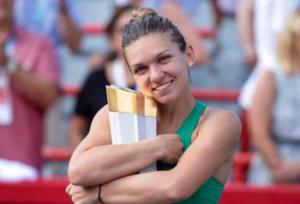 Simona Halep and Sloane Stephens put an incredible fight on a sunny Sunday evening to accomplish a mutual goal: To win the Rogers Cup. In 2 hours and 41 minutes, it was Halep who overcame Stephens in a three-set thriller to capture the throphy in Montreal 7-6(6) 3-6 6-4. The duo's last match in 2018 was in Roland Garros finals where the Romanian came victor and made history as the first Romanian Grand Slam Champion in a long time; after Virginia Ruizi's victory in 1978.

Progressing into the finals wasn't easy for Halep as she had to overcome Pavlycuhenkova in the second round after an epic battle 7-6(9) 4-6 7-5 and had to play against a legend, Venus Williams, on the same day due to rain delays and won 6-2 6-2. The quarter-final round seemed as a yet another challenge, as the No. 6 Caroline Garcia beat a sharp-looking Maria Sharapova 6-3 6-2 in straight sets previous round, but to no avail. Simona surged into the semi-finals after dispatching Garcia 7-5 6-1 and later her semi-final opponent, Ashleigh Barty, 6-4 6-1, to lock her eyes on the throphy.

On the other hand, Sloane silently assasinated her opponents to make her way into the finals. She beat a former Top 10 player, Carla Suarez Navarro, 6-2 7-5 despite she could have finished the match earlier in 6-1. She didn't give a single chance to the Wild Card Canadian, Francoise Abanda, and passed into the next round 6-0 6-2 in a blink of an eye. The current No. 19 seed Anastasia Sevastova's various and tricky play-style couldn't even pose a threat to peaking Sloane as she moved into the semi-finals 6-2 6-2 to welcome the defending champion, Elina Svitolina. However, even Elina Svitolina had no say against roaring Sloane as she soared into finals to set the Roland Garros re-match against Simona Halep.

It was heavily speculated to be a long match, and it turned out to be as one. Long rallies, relatively low-count of winners given the extreme stamina dispalyed by both and variety of shots. The winner of the match was eventually going to be decided by the player who either takes the most risks or turning chances into better opportunities. Simona's strong start paid off as she lead 4-1 and had the advantage to make it 5-1, but couldn't seal the deal and handed the momentum back to her opponent who came down from 1-4 to even the set at 5-5. Sloane, then, found an opportunity to close the set at 6-5 40-15 and later on in tie-break's 6-4, but it was Simona who shut Sloane's points effectively and won the first set in the very first point she found at 7-6.

If Sloane is on, she never gives up, and she proved it here once again. She accelerated her game a little and broke Simona in her first service game to lead 2-0 and finished the second set with only one break advantage, 6-3. The match certainly deserved a final set to decide the victor, but last time it didn't work out for Sloane as she only got a single game in their last meeting. It was, also, worth noting that Simona looked a bit washed out at the end of the second set, simply handing the point over to Sloane with a backhand unforced error in a way we don't expect to see from her. As we move on to the final set, anticipating the winner was still unclear.

The final set included elements from the previous two sets. To the contrary of the second set, Simona started strong and lead the scoreboard 2-0, but Sloane increased the speed and gained the momentum to make it 2-2. It was the fifth game decided the match as Sloane had the chance to make it 3-2, but let Simona soar after failing important points like she did back in the first set. Simona took the opportunity; held on her serve, and broke the serve later, to make it 5-2. Despite Sloane's attempts to recover back, Simona finished off the match with firing an ace at 5-4 40-15.

There you go. The No. 1, Romanian Simona Halep become the champion in Rogers Cup after a tough battle and fierce exchange of sets. Still, I believe the throphy could have risen on Sloane's hands, only if she took more risks on set points. But, oh well. Simona has every attribute to be a world-class champion while Sloane's attitude even on loss is as gracious as ever. Personally, the final was one of the best, if not the best, we had in the current season and it feels nice to see both ladies are leaving the court with half and quarter of a million they deserved during this past week. With the recent win, Simona Halep scored her 18th title in her career overall and will maintain her top ranking in the upcoming weeks.