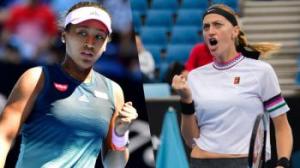 Petra Kvitova and Naomi Osaka have successfully managed to come through obstacles and set up a clash for their first Australian Open Final in 2019. Is it going to be Naomi who shut down the ‘Czech Force’ to aim the successive Grand Slam having won last year in New York or the flawless Petra who kept playing extremely consistent since winning Sydney?

The crucial part of both ladies’ game is their extreme offensive-style of gameplay, which is going to be far more different than what we have seen last year: Caroline Wozniacki versus Simona Halep. Expect the amount of winners hitting its’ peak, fierce rallies, aces, as well as shorter rallies with potential unforced errors from both parties. Perhaps a three-setter unless unexpected conditions affect one or another, which again would be unexpected from such Champions born to play for the big matches. Neither Petra (Wimbledon ’11 and ‘14) nor Naomi (US Open ’18) have lost a Slam final and show sign of weakness to their opponents.

The match holds another importance to the both players, as the winner will be the new World No. 1. Despite having 26 WTA titles, 2-Time Wimbledon Champion, Petra Kvitova couldn’t seek the opportunity to become the first Czech woman to be the number one unlike her fellow countrywoman Karolina Pliskova (Former No. 1). Now, she is closer more than ever after having to recover from a terrifying knife attack at her home in December 2016. The same applies for the Japanese, who will try to live for the “How You Finish is How You Start” motto.

I for one, cannot anticipate a clear winner. However, when Petra is on fire, she is unstoppable and that’s a common fact in the WTA tour acknowledged by the players. Her consistency, both mentally and physically, has literally been flawless and she screams as if she is telling the crowd to take the Daphne Akhurst trophy to home. If Naomi can beat ‘that’ Petra, like she did against Serena in the US Open Final, then I have no words but filled with joy to have such a figure following the steps of becoming an actual legendary star(s) like Williams sisters, Maria Sharapova and the few others instead of the ones roaming around as one-slam wonder and show no signs of improvement ever since.