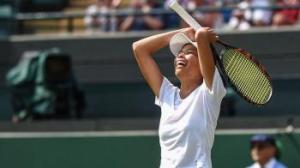 Top seed Simona Halep exits Wimbledon after a tough battle, bowing down Su-Wei Hsiesh 3-6 6-4 7-5. With that loss, Karolina Pliskova becomes the only player in Top 10 to advance into the second week. Halep managed to reach the last eight (QF) of the tournament in the past two years, however this year happens to be the one breaking the chain.

Considering how grass surface is different than any other ones, and given the very-limited time to prepare to the surface right after French Open, players do struggle to keep their forms here, thus Wimbledon is the Grand Slam welcoming the most surprises. However, there hasn't been a time where Top 10 utterly failed to deliver what is expected from top-quality players. The only remaining Karolina Pliskova (7), also was down against Mihalea Buzarnescu 6-1 2-0, and then in tiebreak 6-6, before coming out of the top in three sets.

Odds favor Serena, especially after the current situation of draw, as she is not going to play against anyone seeded until semi-finals if she can reach there. And, that certainly wouldn't surprise anyone after all the seeded players are falling off from the list one by one every day.